Now that things have slowed down a bit, I have had time to work on a personal project I have been putting off forever. It was one of those projects I cut out,  stuck on my cutting table, and waited until I had enough time to work on a project like this.


And here it is! My gusseted corset!

I made it out of a medium weight beige cotton drill. It has a 12″ steel busk down the front, lightly corded bust gussets, and entirely too many rows of boning to count (I got a little carried away).

I have always wanted a gusseted corset but corsetry is one of those things I have avoided like the plague. In the past I have made a few lightweight, mid bust, shaped seamed corsets for myself but was never too pleased with the way they fit. When I got married, I purchased a mid bust, steel boned corset to go under my 1870s era wedding gown. I have worn it as my primary corset since. However, it too does not fit properly. It cuts into my hips and smashes my bust. And, it is not comfortable (it has no flex due to the steel boning) when worn for long periods of time.

So, it was time. Time to make a proper corset.

Not even wanting to attempt to draft a pattern for a gusseted corset, I opted for this ready made Simplicity pattern instead. 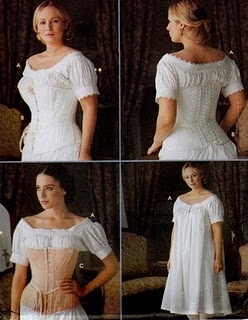 Using a commercially graded pattern allowed me to and explore construction techniques, study boning placement, and focus on fit.

Before I made this corset, I looked at original gusseted corsets dated from 1855-1865. Most of the corsets from this period use baleen and sometimes combine both cording and boning techniques in their construction. For cording, I used cotton crochet yarn and for boning I chose synthetic poly boning (it is similar in weight and function to baleen).

I chose to use poly boning in this corset because (1.) I had a surplus on hand, (2.) I didn’t have to worry about cutting steel, and (3.) the majority of the extant corsets I looked at have practically molded to the body that wore it.

Synthetic Poly Boning 1/4″ wide
While poly boning does conform to the body when worn (the heat from your body actually reshapes the boning), it does still provide a great deal of support when properly placed.

I chose to use the Simplicity 7215 pattern because I felt the models on the front of the package had a figure similar to mine (and therefore the pattern would need less “tweaking”) and felt this corset pattern created the silhouette I was looking for.

The pattern went together pretty easily. I did not do all the fancy thread work on the gusseted areas before I began putting the pieces together. I will finish that area off with decorative hand stitching later. The cording of the bust gussets is not part of the pattern. I chose to add that myself. The purpose of the cording is to provide additional support to the bust of the corset. I debated whether or not to cord the hip gussets as well (not for support but for aesthetic reasons) and opted not to. I think it was a good decision. 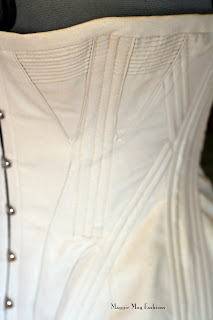 I used the lining pieces as my muslin and made any minor adjustments to it before I put the outer layer of the corset together. This worked well and moved the project along quickly.

I loosely followed this pattern’s boning placement specifications, opting to return to images of extant corsets as my primary boning guide. There is a great deal of engineering that goes into corsetry and I experimented with boning placement until I figured out where support would be most beneficial to my particular body shape. I placed additional boning at the bust and waist and tried to leave as much of the hip area as free as possible.

Overall, I am pretty pleased with the completed corset. There are a few minor fitting issues that asserted themselves after the boning and busk were put in. The bottom front of the corset wants to protrude outward a little. This is a result of the flat steel busk not wanting to round itself over the belly area. I think using a spoon busk would correct this, but at this point, I am not willing to take this corset apart and try to insert another busk. 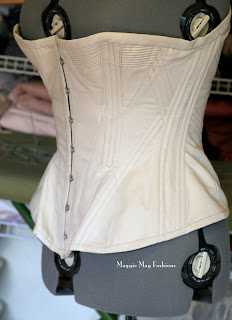 I have not yet tried this corset on over all the proper underpinnings and am anxious to see how that affects any of my minor fitting issues. I intend to finish this corset with some pretty decorative hand stitching (or “flossing”) before I call if officially done. I’ll share images of the completed corset in a future post!

2 thoughts on “Adventures in Corsetry!”