We recently completed a custom Edwardian Era gown for a client in Philadelphia. The gown was based upon this 1911 Delineator illustration:

The gown features a fitted underbodice of floral taffeta with a kimono overbodice of solid taffeta. Both are fitted into a waistband. The overskirt is the same floral taffeta and the trained underskirt is solid. The sleeve and skirt trimming is cotton velveteen. A removable velveteen sash was also included. 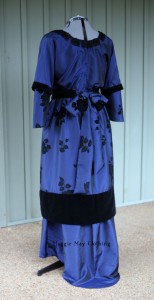 Initially I intended to gather up one side of the overskirt to create the sloped silhouette as shown in the original Delineator image. However, the gathers made the overskirt pouf in a rather unbecoming manner and thus I elected to remove the internal gathering and leave the skirt straight. In hindsight, if I had cut the overskirt wider on the side I intended to gather, I believe it would solve the poufing issue. Next time, I will try it and let you know!