I recently received an inquiry in response to a post I did a while back about historical maternity wear. In reference to this gown: c. 1850s (source Augusta Auctions) 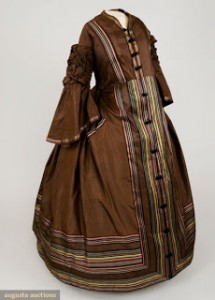 Question: Is this a dress that a woman would have worn during the day, at home? If not, is there a better example of that? How would the woman who wore the dress have described it–what language would she use? For example, what would she have called the material from which it is made? What would be the word for such a dress–is it a day dress?

Answer: The term “maternity” in reference to clothing did not come into popular language until the 1950s-1960s. However, evidence of publicly marketed “maternity clothing” can be traced back as early as the ready made mail order industry of the 1900s. During the mid half of the 19th century, there were no specially made garments for pregnancy. Pregnancy was simply adapted to. As a result, clothing of this period worn during pregnancy retains its same name- i.e. day dress, morning gown (or wrapper), evening gown, etc. The gown shown above is a silk day dress which was meant to be worn at home, in public, or when receiving visitors.

During the first two trimesters of pregnancy women continued to wear their pre-pregnancy clothing- including corsets. By the third trimester women began to adapt their clothing by adding additional panels (as seen in the gown above), taking out darts, and temporarily enlarging dresses anyway possible with the intent that the gown would be taken back in after childbirth. Corsets were loosened as well. 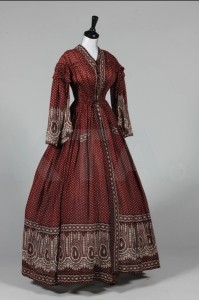 Today, people often associate the term wrapper with maternity wear for this period. However, according to The Dictionary of Fashion History by Valerie Cumming, et al, a wrapper is a loose, robe which might be worn in bed. During the 1850s, the wrapper was also worn during the morning hours before a lady fully dressed in her corset, petticoats, etc. It is quite possible the term gained its association with mid 19th century maternity wear because by the last trimester of pregnancy, middle and upper class Victorian women stayed at home (i.e “went into confinement”) and most likely wore their wrappers for the better part of the day. However, a wrapper was not a garment meant to be worn outside the home, in public, or when receiving visitors.