There are a few blogs I keep up with. One of them belongs to a historic clothing exhibit specialist in the UK. Here is what she wrote regarding a Regency Era exhibit she is working on. 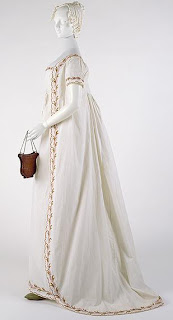 The provenance of many of the dresses indicate that the original owners were from the bourgeois and middle classes of society. You can gain more of an insight into the fashion history of a cross section of the population rather than just the clothes of the aristocracy.

These dresses answer many questions about Empire/ Regency fashion and by displaying them in this way you get a sense of how the dress could have been actually worn. On a few occasions when putting a dress on a mannequin we could see there was something not quite right about the way it fitted. Closer examination showed this was due to the use of pins or brooches to fit the bodice. Many of the dresses had evidence of tiny pin holes. On portraits and miniatures of the period you can observe that belts, jewellery and even decorative flowers were used to aid the fit of the bodice, especially in the centre front. Stays of this period had a centre front busk which provided a solid point on which to pin the bodice to stop it riding up from under the bustline.

I have often heard it said that people were smaller in the past. Maybe on average they were, due to factors including health and diet. Many of the women would have been born in the later part of the 18th century and would have been from the ‘stayed’ generation. Some would have grown up wearing a form of stay or corset and this constriction would have had an effect on the growth of the ribcage. However at least ten of the dresses in the collection were worn by women who were at least 5ft 6inches in height and their dress size would be an English size 10-12, so not so small.


Thanks to Natalie Garbett for the insight into gowns from the Regency Era!