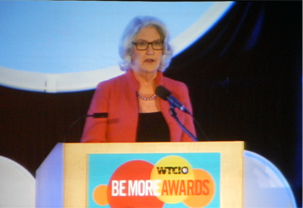 This morning I was honored to have the opportunity to meet Rebecca Eaton (Exec Producer of PBS’s Masterpiece) and hear her speak about her 25+ years as producer of the series (and specifically how Julian Fellowes’ Downton Abbey has come to change the status of Masterpiece Classic).

Rebecca Eaton and self proclaimed “Anglo-file” was the keynote speaker for this year’s PBS station’s “Be More” awards- a series of awards given to local nonprofits as recognition for their work within the community. However, it was Rebecca Eaton whom I specifically came to hear and really had no connection to the awards ceremony at all.


First of all I must tell you that Rebecca Eaton is completely unpretentious, unbelievably real, and quite honest! She is funny and intelligent. Her speech didn’t really seem like a speech- but more of a conversation amongst friends. She spoke of her humble beginnings at her local PBS station in Boston (where she still works) and of her background. Her father was an expert in Shakespeare and her mother was an actress. She was a English major and thus it seemed as if a position with PBS was a natural fit. 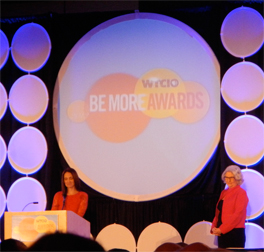 Over the years she has worked with several individuals whom we now consider acting icons- Helen Mirren, Maggie Smith, Judy Dench, Hugh Laurie, Kenneth Branagh, Laura Linney, and Jillian Anderson just to name a few. She talked about personalities and gave insider info about what it was like to work with some of these favorites. For example, she noted how outstanding Jillian Anderson is in all the pieces she works on, how funny Hugh Bonneville is, and how kind and passionate Dan Stevens (or “the man with the azure eyes”) is on set. She talked about how estranged Elizabeth McGovern felt on the set of Downton Abbey as the only American actress in the cast.

She talked a bit about how the Masterpiece series comes to be. She works with a very small staff- only 8 people including herself out of her office in Boston. All of her productions are filmed in Europe (primarily in conjunction with BBC.) She spends hours reading scripts, looking over “bibles” (or the generalized plot outlines which details a production’s premise, setting, character profiles, and story continuity), and says she watches a lot of British programming. Masterpiece then either picks up these British productions and airs them on American television or acts as co producers for upcoming productions (as they did with Downton Abbey). When acting as a co producer, Rebecca Eaton actually works on set.


Interestingly enough when she first read the generalized synopsis for Downton Abbey, she said she was not overly impressed. She says she was on the fence about it. It was not until she received a call from Simon Curtis (Elizabeth McGovern’s producer husband) who urged her to peruse Downton she gave it further thought. And, once she found out Maggie Smith had been cast, the deal was sealed and Downton began production in 2010.

Currently, there is a third Downton in production. This 10 hour series casts Shirley McClain as Cora’s American mother. Rebecca Eaton says she was a bit concerned about the on set interaction between Maggie Smith and Shirley McClain but says the two actresses are getting along wonderfully. In fact, she was very happy to mention that the entire cast of Downton is a very tight knit group- and apparently a group with a great deal of integrity. She says there is no behind the scenes drama, no love affairs, no marriage breakers. (Sorry ladies- Dan Stevens is happily married with two beautiful children!)

She talked a bit about the set- all the furnishings are period to the house and none of the actors or actresses are allowed to sit on the furniture unless the scene calls for it. There is absolutely no food or drink on set. When Downton is not filming, the house is open to tourists and looks exactly the way it appears in the series.  However, the downstairs scenes are filmed an hour away at a film stage. Nothing remains of the house’s original downstairs as it has been converted into a gift shop.

As for the future of Downton, Rebecca Eaton says she hopes it continues on for some time. However, it will be difficult to keep the same cast members as they wish to move on to other projects. And, unlike American television (which is written by a team of writers), Downton Abbey is the brainchild of one man- one writer- Julian Fellowes. They already have the first 5 hours of Downton (series 3) filmed and Fellowes is still writing the last three hours in this series. Eaton hopes he will be able to continue the saga of the Crawley family for a while longer. (She hinted in season 3, someone will be born and one of the main characters will die.)

The popularity of Downton Abbey has skyrocketed Masterpieces’ ratings by 35%. But more importantly, it has brought in a younger audience (those in their 20s and 30s)- which will ultimately lead to the preservation of the series’ future. There are several new, more youthful productions scheduled for release this spring- including Sherlock, Inspector Morse, and an dramatic new interpretation of Charles Dickens’ unfinished The Mystery of Edwin Drood.

I have always been a fan of PBS’s Masterpiece but after having the opportunity to meet Rebecca Eaton and hear her speak with such passion about her work, I will forever be a Masterpiece fan. Thank you Ms. Eaton for your brilliance and revolutionary vision, and for introducing Masterpiece to a whole new generation! 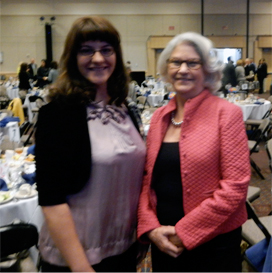 Insight from an exhibit specialist

New Policies for Film and Television

It’s the most wonderful time of the year!