Did you ever have one of those pieces that just seemed to be “cursed” from the get go? In the spirit of the season, I will tell you the tale of just such a thing- the cursed cage crinoline. 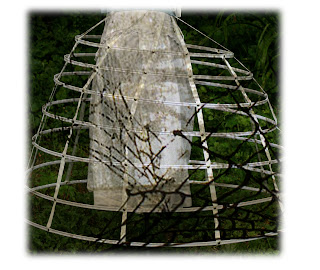 A dangerous contraption even upon its beginnings, the cage crinoline led to the demise of many a young Victorian lady. Many a damsel caught their foot in the bottom two rows causing them to tumble to the ground spraining ankles in twisted messes. Some high fashion ladies wore their cage crinolines so wide, they were completely unaware when the hems of their gowns caught fire in the burning embers of the fireplace. Yes, a cursed contraption from it’s inception, nearly 150 years later, the cage crinoline continues to bring its troubles.

It all started about a week ago when I received a rush order on a cage crinoline. Not having the correct size in stock, it seemed I would have to make one and make one quickly. It had been a while since I had made a cage crinoline and I neglected to realize my stock of materials was low. So off I went to the local shop to pick up some hardware. Much to my dismay, they did not have the type of rivets I use, so I picked up what they did have- not too concerned really.  But, they did not fit my rivet setter.

So I packaged it up, addressed the box, and happily took it off to the post! I had completed it just in time to meet my customer’s deadline! Or so I thought.

On the day the package was scheduled to arrive at my customer’s door, I received an email from her that it had not been delivered. Concerned, I contacted the post office. To make a long story short, the postal worker who took my package entered in the wrong area code on the shipping bar code. Even though the correct zip code was on my mailing label, the cage crinoline is headed off the most remote location they deliver to!

No one knows where the cursed cage crinoline is now. Perhaps it is roaming the countryside looking for its final destination!

2 thoughts on “The Tale of the Cursed Crinoline”

An gown inspired by an 1859 fashion plate