Each year I teach a spring course at the local university, but this past week I had the opportunity to be a guest speaker for a group of high school students- primarily young ladies from the ages 14-18. The topic was beauty- and the extent to which women have gone in aspiration of perfection. I focussed my lecture images on the 18th and 19th century- as this was a time period when reforming and reshaping the human body was in its extreme.

I began with a question: What is beauty? This is a difficult question to answer- thus my reasoning for asking it.  I asked a few more leading questions: Who is beautiful? What are the characteristics of someone who is beautiful? Why do we believe these people are beautiful? Can everyone be beautiful?


Once the room started to open up, I was impressed with these young ladies answers. While they could not give me specifics on what they personally deem to be beautiful, they did all agree that everyone can be beautiful “in their own way.” Interestingly enough, when I asked them what society defines beauty as, the room roared with response.I told them there is one woman who is defined as the most beautiful woman in the world. Her image is immediately recognizable. Everyone knows who she is. Everyone recognizes her face. I asked them if they would like to see a picture of her. Of course, they said “Yes.”So, I showed them her image: I asked the young ladies if they thought Lisa del Gioconda was beautiful. Some said yes, and others said No. I proceeded to discuss the ideals of the 16th century and how it was considered beautiful to have an extremely high forehead (achieved by plucking the first few inches of the hairline away). I discussed the intentional removal of the eyebrows via waxing or plucking. And, I used her plump rounded hands to discuss body weight. I explained in the 16th century (and even up to the 19th century) being plump signified wealth- an abundance of food- the ability to obtain large amounts of goods.

I went on to further my argument for Mona Lisa’s unrivaled mark on the world of female beauty by showing them multiple images of present day celebrities (those they would immediately recognize) posed and portrayed as the Mona Lisa herself. (Just do an image search for La Jaconde on the internet and you will see what I am referring to.) I asked them, “Why would these celebrities want to be portrayed as the Mona Lisa? What is about her that makes her so famous?”

After this, I showed them a variety of 18th century corsets, panniers, pocket hoops, and discussed how the ideal shape of the 18th century was that of an inverted triangle on top of a rectangle. I asked if they would be comfortable wearing these garments on a daily basis, and there was a resounding “No.” 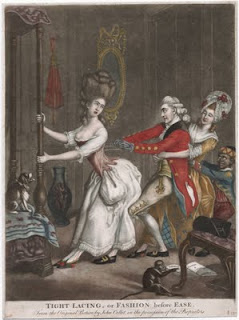 I discussed 18th century hair and make-up practices. We discussed the origin of beauty marks and the cloth and leather face patches fashionable during this period (used to cover small pock scars). And we  discussed the use of toxic materials in 18th century cosmetics. 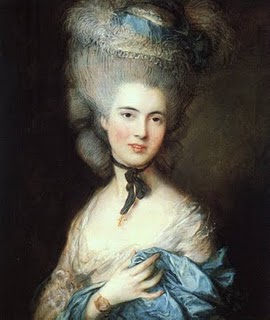 Portrait of a Lady in Blue
Thomas Gainsborough, 1779-81
The Hermitage Museum
Image intended for educational purposes only

We then discussed the rebellion of the corset and the free flowing gowns of the Napoleanic period. We talked about how ladies of this period often literally caught their death during the winter months by wearing too few layers of clothing because it was “unfashionable.” I asked if any of them had gone out wearing things that were not appropriate for the weather because they wanted to be fashionable. Some nodded their heads, “Yes.” 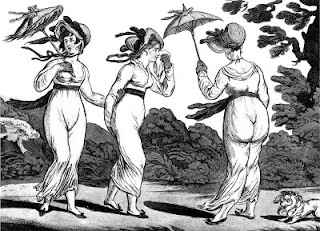 We discussed the reimergence of the corset in the 19th century and the development of the cage crinoline. I jokingly remarked, “During this period, it was fashionable to put ladies in cages…..” 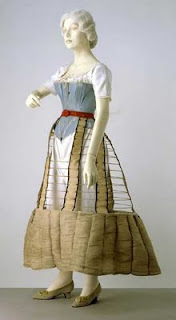 I discussed the alteration of photographs in the 1890s to display the much sought after wasp-waist. I discussed Cathie Jung, who has made it her life mission to achieve the smallest waist in the world but now has to forever wear a corset because her midsection can no longer support her upper body weight. 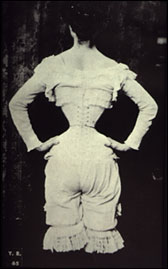 I reminded them that every photo that comes across their desk, every image they see on television has been altered in one way or another.

Finally, I showed them an image of Dominic Philbert’s reprise of the Mona Lisa (created for Safarir magazine). And, then I showed them this image (pulled from a French blog/origin unknown): 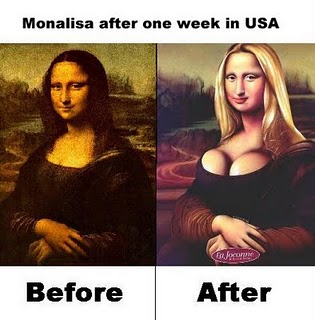 After a great deal of discussion, I concluded with one final question: In 100 years, what will people say our definition of beauty was? This is a question we all must stop and ponder. Do we allow the media to dictate our perceptions of beauty? How about the fashion world? Today, just as it was 200 years ago, it is an ideal that is ever present and constantly changing.

5 thoughts on “Discussions on Beauty”