Just a few hours from my studio, the Jane Austen Dresstival in Louisville has been a destination for historical costume enthusiasts and Jane Austen fans from across the nation. The festival has cultivated a serious following for over a decade now! And I can see why!

Wow! What an experience!

My interest in attending this year’s festival was to listen to keynote speaker Cristina Barreto discuss her book Napoleon and the Empire of Fashion and hear tidbits about her private clothing collection that lovingly graces its pages. Sadly, a few days before the festival, Barreto cancelled her appearance for personal reasons. I was a bit disappointed but life can be unpredictable. Things happen. And of course there were still plenty of other things to see and do at the festival. So, off we went to our first ever Regency Era dress event.

We arrived at the festival about an hour after it began. I had pre-purchased my festival admission online so all I needed to do was show the attendant my receipt and that was it! Parking was very convenient and located in a grassy field just outside the visitor’s center.

Upon entering the festival there were tents full of attendees taking workshops, “learning the ropes” at the first time attenders meeting (Oops! Missed that one!), and crowds shopping the auction items.

We wandered into the Visitors Center where there was a lengthy and rather congested line for the first tea service. (Note to self- arrive early for the tea!) Once we got our bearings, we headed off the well marked cobblestone paths to the house grounds where all the vendors were set up. 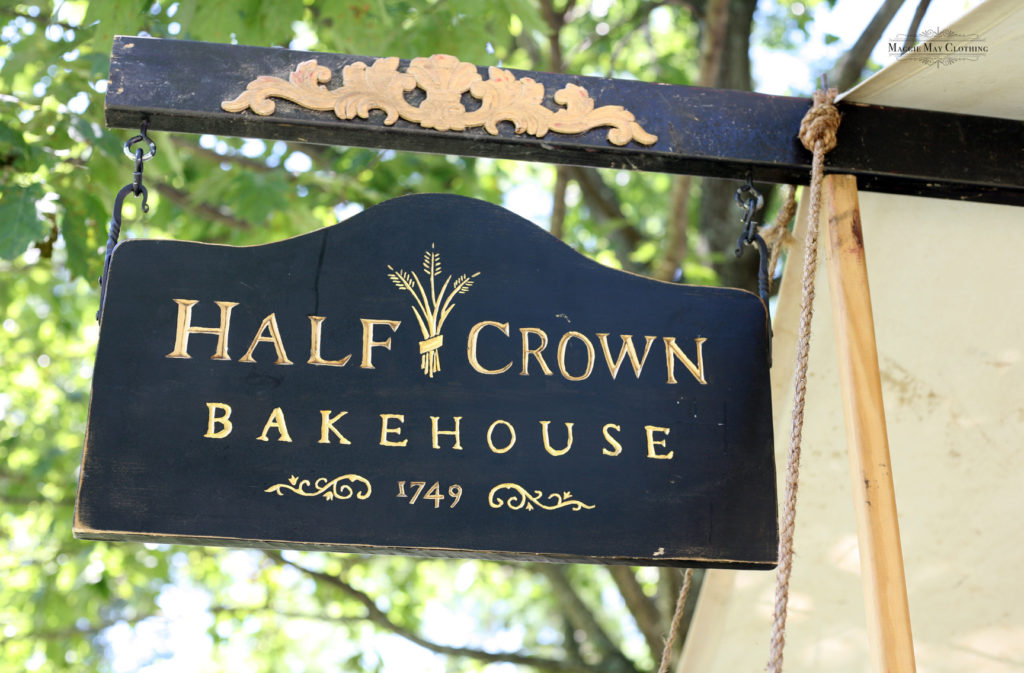 The first vendor who caught my eye was Half Crown Bakehouse from South Carolina. Their mobile 18th century oven was pretty amazing! They built it on a trailer and hid the modern flat bed with some really nicely- made wooden panels. The gentlemen said the oven weighs a whopping 6000lbs and I can imagine what hauling it is like. But they were one of my favorite spaces at the festival so of course I had to bring home a round loaf of fire baked bread.

The next shop I wandered into was Flying Heart Millinery with all of her lovely, fluffy confections we call “caps.” These two ladies were some of the friendliest vendors I met at the festival and I picked out two styles of caps for my “must have” list for a little later this year. Valerie Long’s caps are made of gossamer cotton organdy or luxuriously soft linen. She hand roll- hems all of her ruffles and embroiders a sweet little white-work heart onto each one.  I have avoided caps all my historical clothing life (because they make me feel either like a little girl or a matronly lady) but these decadent little things may just have changed my mind. 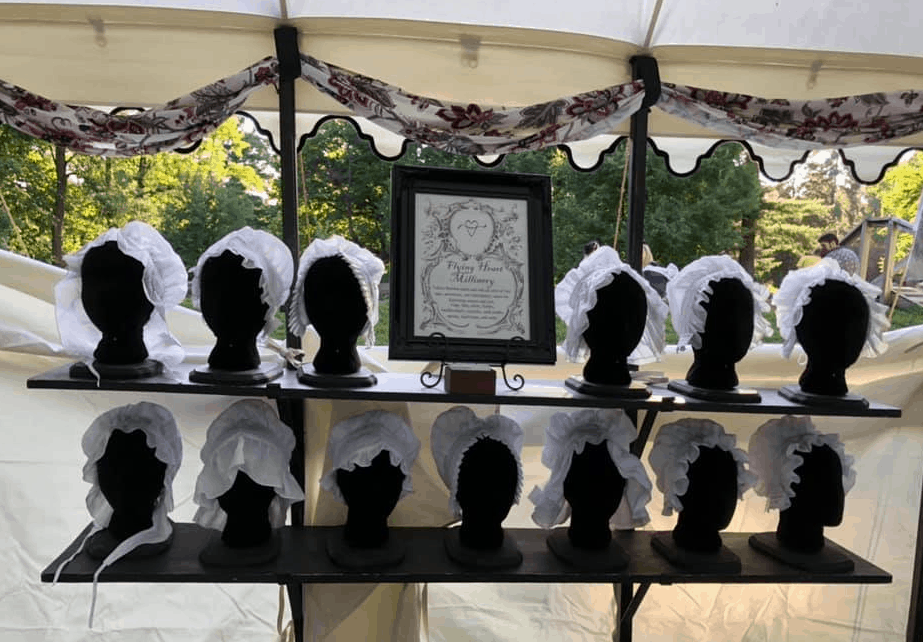 I picked up a pair of period scissors from a lovely couple and chatted with the ladies at Sense and Sensibility Patterns before strolling over to take in a Punch and Judy show. This age old entertainment never gets dull and my daughter named it one of her favorite activities at the festival. 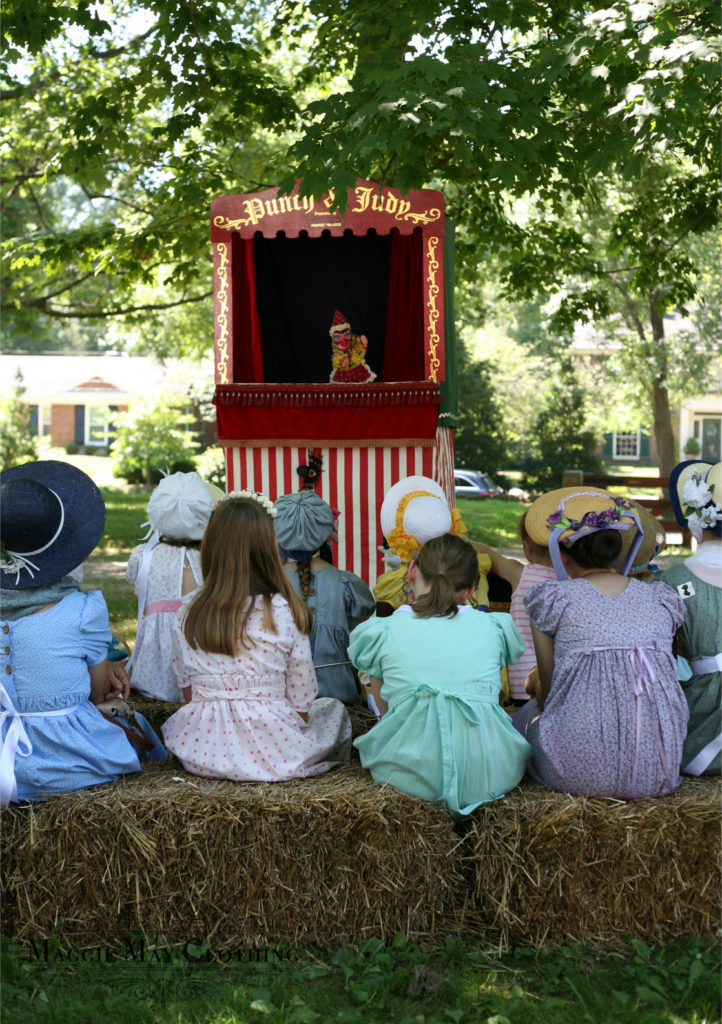 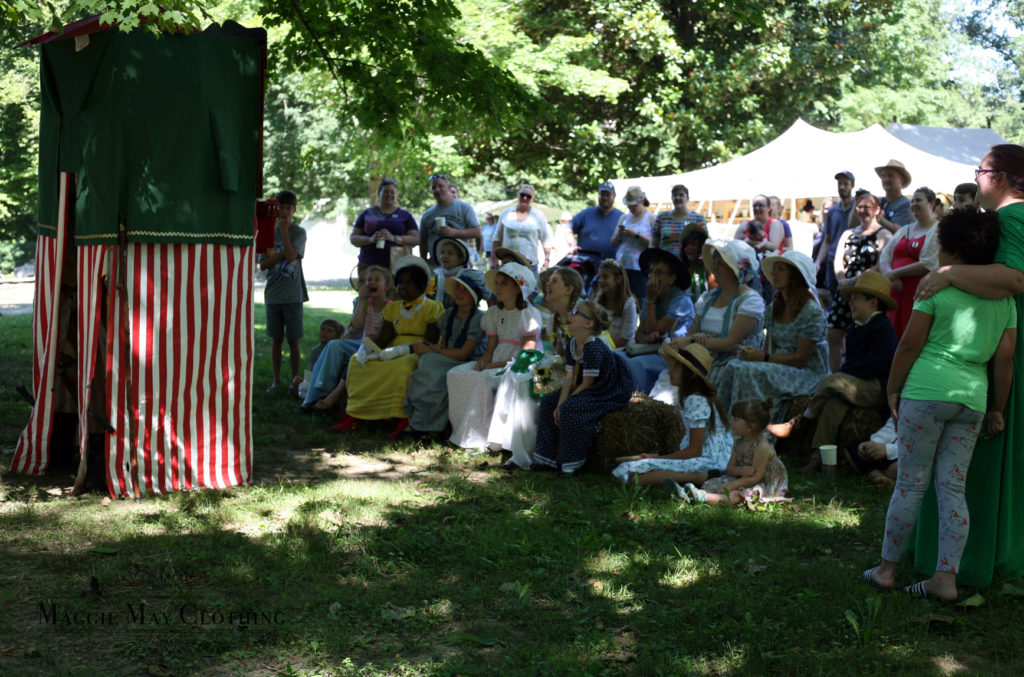 While she watched, I perused the remaining vendor tents where I was fascinated with the wig making demonstration by Custom Wig Company. The sheer amount of patience it takes to not only hand tie lengths of real human hair onto threads, plus knot one’s own netting, and then hand stitch the linen tapes makes me think these period hair pieces belong in museums rather than on heads! Absolutely stunning! 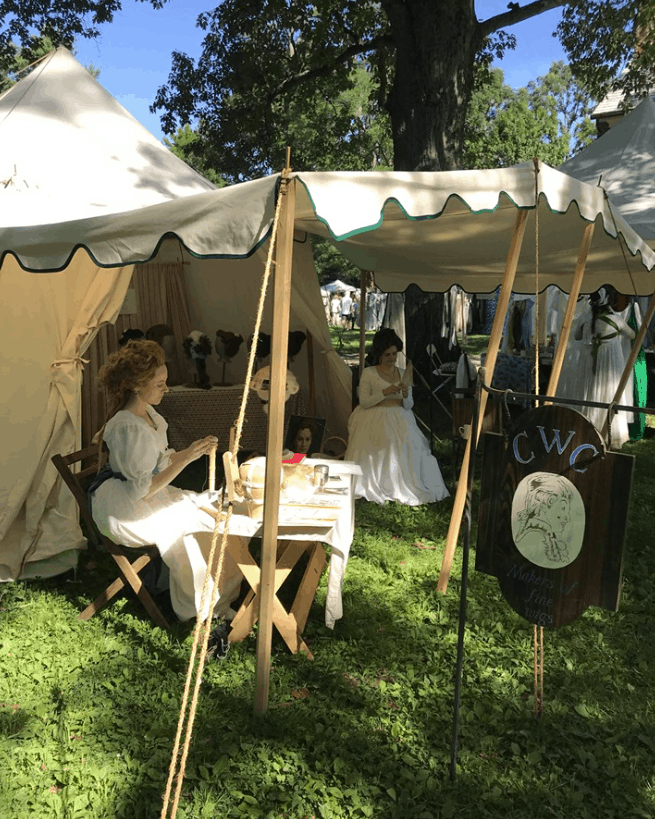 The quality of vendor workmanship at the event was impressive. I quickly realized The Jane Austen Dresstival must be one of the premiere shopping events in the Eastern United States! This was further supported by the fact that nearly all the hats at the festival were sold by mid day Saturday! So, if you are coming to shop the festival, do it on Friday and show it off on Saturday and Sunday!

Two of my final favorite vendors were Bingley’s Tea and Valerie Skinner- a South Kentucky artist who specializes in reproducing early American Folk Art. I absolutely adore fraktur and this late 17th century (c. 1690) design caught my daughter’s eye. It looks lovely on the wall in her bedroom!

I prepurchased online two tickets to the Afternoon Tea and after waiting in line (we arrived early as noted upon entrance) were seated at a cozy little table at the center back of a large open room partitioned off from a group of indoor vendors. Seating went smoothly and before long, the “tea room” quickly became “a packed house.”  We were immediately served tea, and the servers were quite attentive.  Throughout the remainder of the service, we never had to wait for anything. 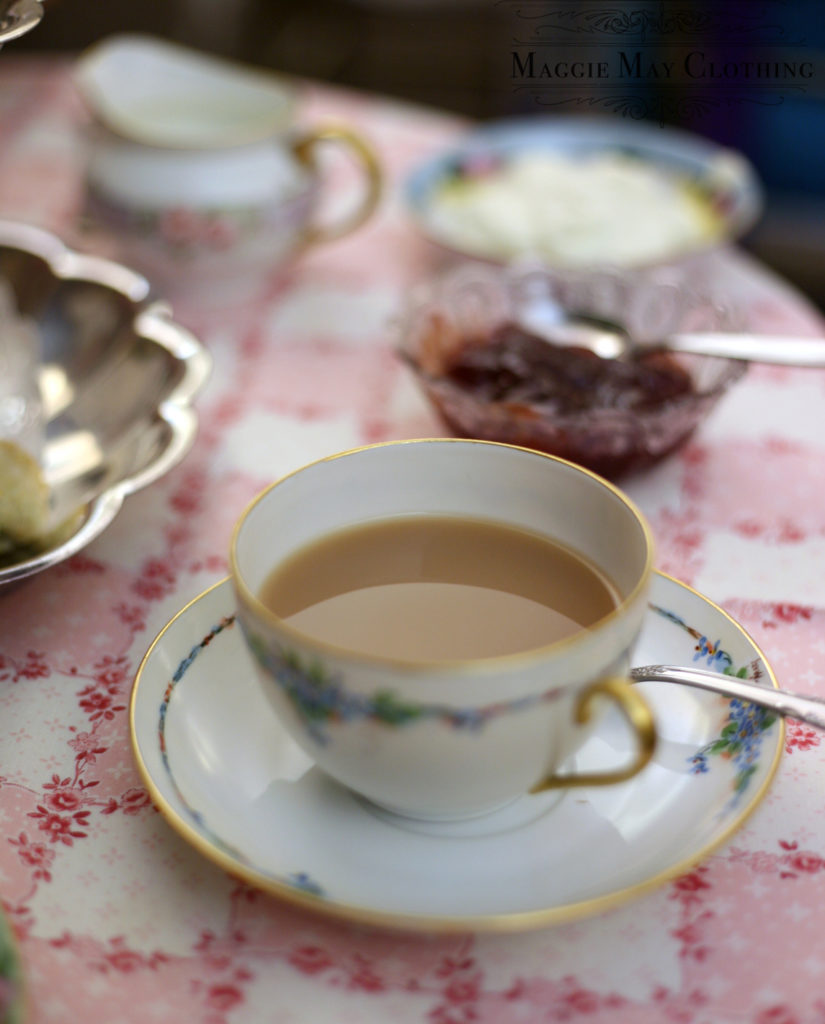 Being fans of sturdy black teas, our favorite was Darjeeling. My daughter was a fan of the clotted cream and put dollops on everything and anything she could find! The assortment of finger foods was more than substantial and by the end of service, we both just nibbled at our desserts. She and I came to conclusion that as much as we loved putting on our Queen Victoria’s charity Tea back in May, attending an Afternoon tea was entirely more fun! 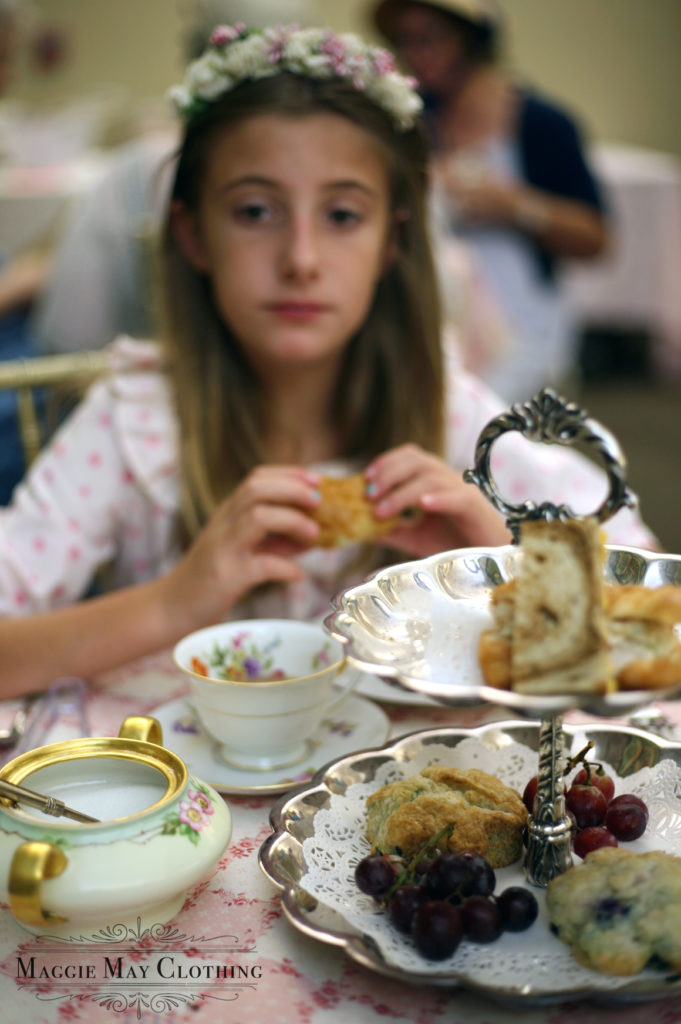 Overall, the Jane Austen Dresstival in Louisville, Kentucky was really quite an enjoyable experience. The atmosphere was light and jovial. People in attendance genuinely seemed to be having a good time. There were ladies of all ages mingling about in groups. There were quite a few men there too- more than I expected to see actually. A handful of children were also in attendance- making this a semi family friendly event. (Most activities are geared toward adults or older children). The weather was somewhat pleasant (it is JULY in the upper South after all…..) and by 3:00pm, as the heat of the day pressed upon us, we were ready to wrap up our experiences at Historic Locust Grove and bid farewell to the JA Fest. Perhaps we will go back again sometime. And maybe bring some friends! 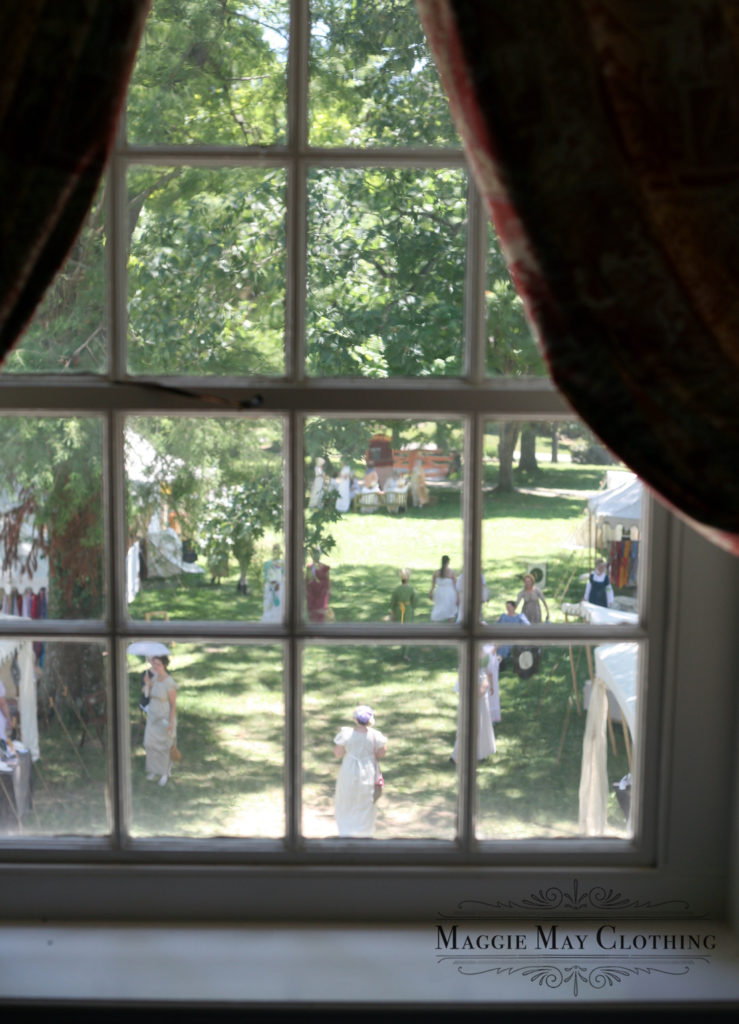 My interest in historical costume began at a very early age. I knew by age 5 I wanted to be a designer. Over the years I have been fortunate enough to turn my passion into a full time business. You can find my costumes onstage in NYC, on the big screen, and in museums around the globe. View all posts by Susan

Use of buttons on historical women’s dresses

Fear not the elastic!