For an entire spring, I watched as these little critters  made my trellis into a playground, raced around in the grass, and played peek-a-boo in their den entrances.
Then one summer day, I watched Mrs. Tiggly Winkles move her family across the street into a wooded lot. I thought for sure she would return just as soon as her little Winkles were old enough to fend for themselves. But after nearly a year, I had not seen any sign of her.
It is now fall once again. The air is cooling and the leaves are beginning to fall. This morning, I headed out to the studio. Low and behold, who was there to greet me? Why Mrs. Tiggly Winkles! She was munching on a pear that had fallen off the trees surrounding my studio. Welcome back my little friend! 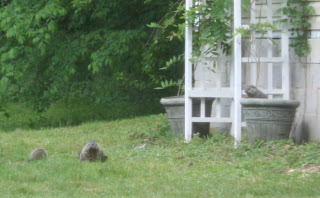